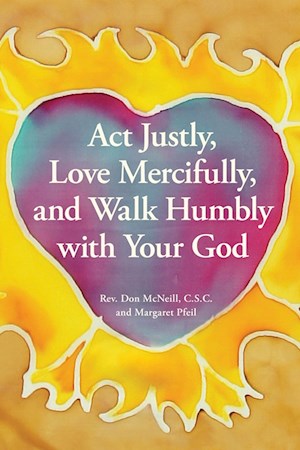 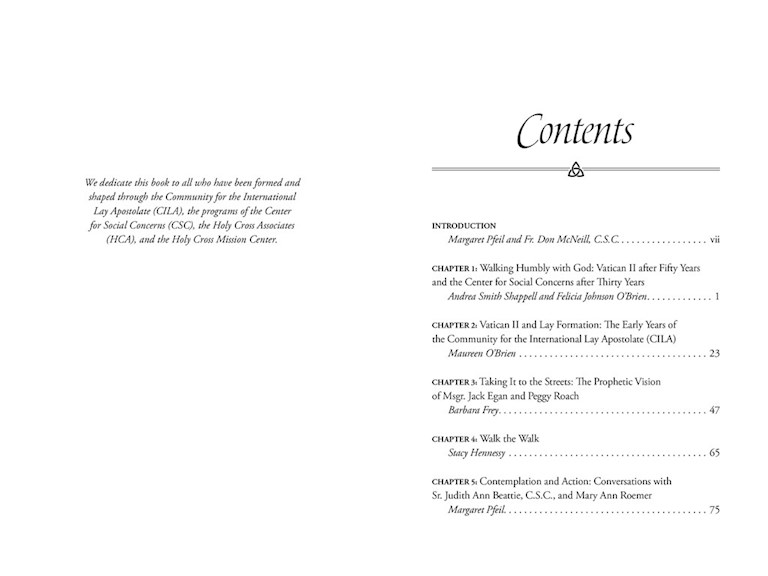 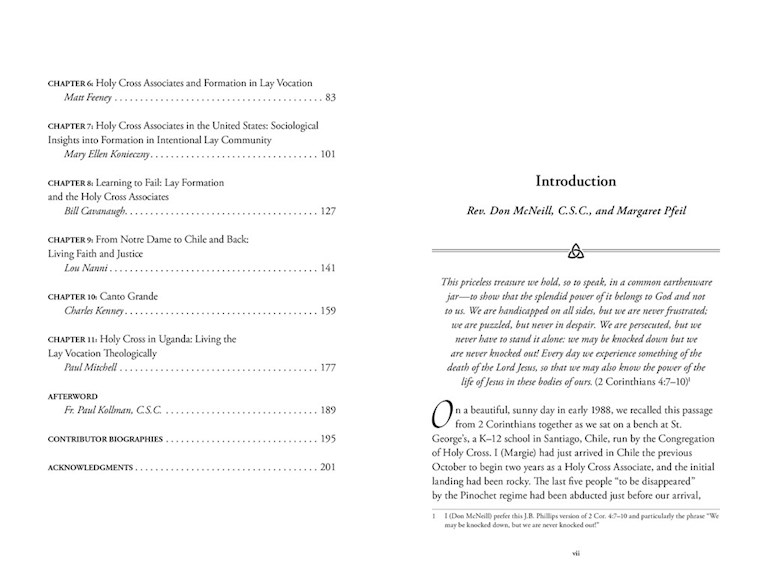 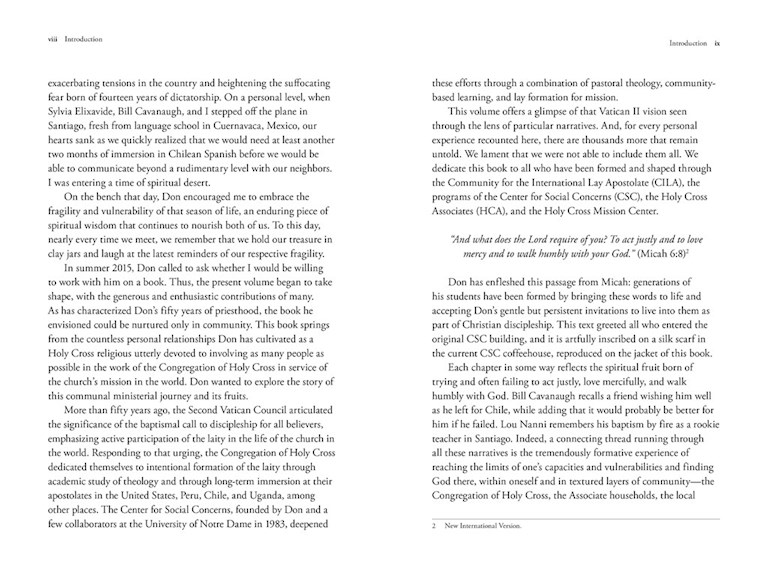 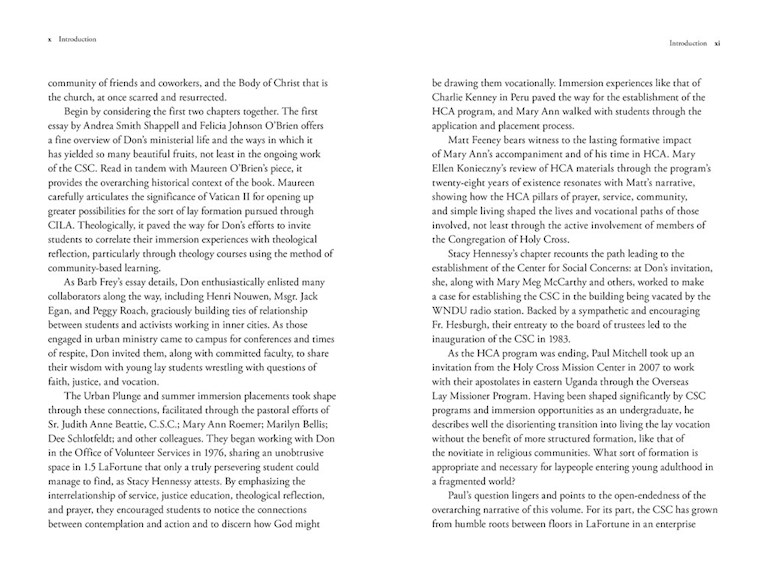 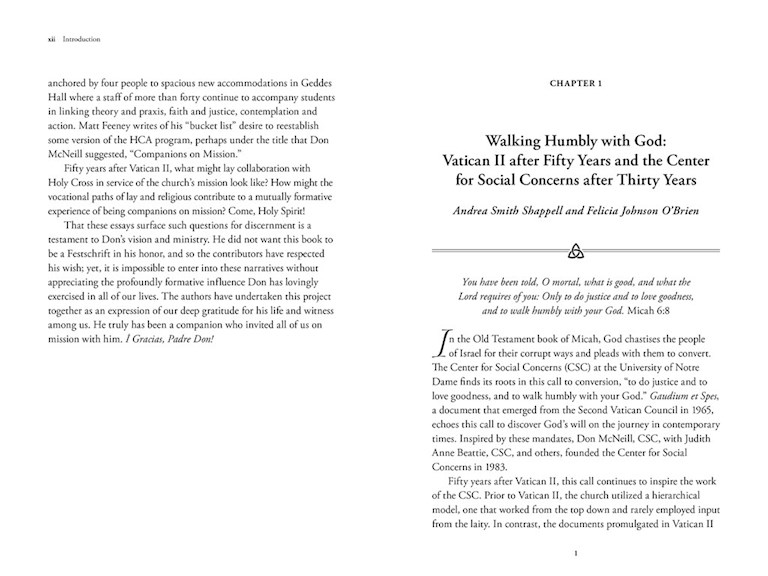 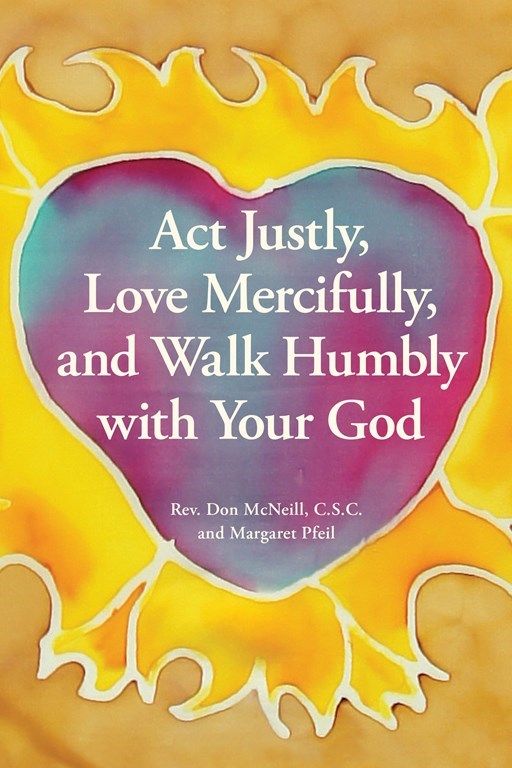 Act Justly, Love Mercifully, and Walk Humbly with Your God

Act Justly, Love Mercifully, and Walk Humbly with Your God is a series of eleven essays by people who have been shaped by their formation through the programs of the Center for Social Concerns at the University of Notre Dame, as well as by postgraduate service work with the Congregation of Holy Cross. The Center facilitates engaged learning, research, and service informed by Catholic School Tradition; learning becomes service to justice.
The Center for Social Concerns provides community-based learning courses, community-based research, and service opportunities for students and faculty and lies at the heart of the University of Notre Dame. It is a place where faith and action, service and learning, research and resolve intersect. For more than 30 years the Center has offered educational experiences in social concerns inspired by Gospel values and the Catholic social tradition so that students and faculty may better understand and respond to poverty and injustice. Through the Center's programs students, faculty, staff, and alumni are enabled to think critically about today’s complex social realities and about their responsibilities in facing them.
The Second Vatican Council articulated the significance of the baptismal call to discipleship for all believers, emphasizing active participation of the laity in the life of the church in the world. Responding to that urging, the Congregation of Holy Cross dedicated themselves to intentional formation of the laity through academic study of theology and through long-term immersion at their aposolates in the United States, Peru, Chile, and Uganda. The Center for Social Concerns, founded at the University of Notre Dame in 1983 by Fr. Don McNeill, C.S.C, deepened these efforts through a combination of pastoral theology, community-based learning, and lay formation for mission.
This edited volume consists of eleven firsthand accounts from those directly formed by the Center for Social Concerns' approach to pastoral theology and through post-graduate collaboration in ministry with the Congregation of the Holy Cross. These fifteen essays will hold great interest for Catholics wishing to explore the implications of Vatican II for the church's mission in the world, for undergraduate and graduate students focusing on pastoral theology and missiology, and for all the people of good drawn to explore the relationships between faith and justice, contemplation and action.

Fr. Donald P. McNeill, C.S.C. graduated from the University of Notre Dame in 1958 and entered the Congregation of Holy Cross in 1959. He was ordained a priest in Rome in 1965. He earned his doctorate in Pastoral Theology in 1971 and then returned to Notre Dame to teach in the Theology Department and to work with students using the method of experiential learning. He gave leadership to the development of collaborative work between lay people and the Congregation of Holy Cross in the late 1970’s, leading to the establishment of the Holy Cross Associates Program and later efforts with the Holy Cross Mission Center.
Don founded the Center for Social Concerns in 1983, with the support of many among the faculty and staff at Notre Dame, including Fr. Theodore Hesburgh, C.S.C. and Sr. Judith Anne Beattie, C.S.C. He served as Executive Director of the CSC until 2002. Thousands of students, alumni/ae, faculty, and staff have participated in CSC community-based learning and research programs locally, nationally, and globally over more than thirty years.

Don went on to become a Senior Fellow at Notre Dame’s Institute for Latino Studies in its Metropolitan Chicago Initiative, assisting in pastoral work at St. Ann’s Parish in the Pilsen neighborhood until 2008. He now resides at Holy Cross House at Notre Dame and recently celebrated his 80th birthday and 50th anniversary of priestly ordination.

Dr. Margaret R. Pfeil holds a joint appointment in the Theology Department and in the Center for Social Concerns at the University of Notre Dame. She is a Faculty Fellow of the Kroc Institute for International Peace Studies. Her research interests include Catholic social thought, racial justice, ecological ethics, ecumenical dialogue, and peace studies. With Tobias Winright, she co-edited Violence, Transformation, and the Sacred: They Shall Be Called Children of God (Orbis Books, 2012). With Gerald Schlabach, she is co-editor of Sharing Peace: Mennonites and Catholics in Conversation (Liturgical Press, 2013), and with Laurie Cassidy and Alex Mikulich she is co-author of The Scandal of White Complicity in U.S. Hyper-incarceration: A Nonviolent Spirituality of White Resistance (Palgrave, 2013), which has been issued in paperback in Spring 2016. She is a co-founder and resident of the St. Peter Claver Catholic Worker Community in South Bend, Indiana. She was deeply formed by her time as an undergraduate student participating in the programs of the Center for Social Concerns and as a Holy Cross Associate in Chile, 1987-1989, and finally, as a graduate student team-teaching with Don McNeill and Andrea Smith Shappell.